What is MCB – Miniature Circuit Breaker

In earlier days, we used fuses to trip the circuit under abnormal conditions. Fuse will protect the circuit by blowing themselves; hence you need to replace the same with a new one. The entire process consumes time.

So that, MCBs are designed to operate automatically and trip the circuit under fault condition, also we can reset the same in a lesser period. This is the main advantage of the miniature circuit breakers.

A single line diagram is used to represent the device in the circuit. In the market, you might be seen, there are many types of MCB such as a single-pole, two-pole, three-pole and four-pole.

For simplicity, I am going to take a single-pole MCB.

MCB is a combination of 8 different parts such as…

It involves turning on and off operation of the MCB. This is the only mechanism used to indicate the status of the miniature circuit breaker. If the knob is in the upward direction, you should consider as ON position, if it is in a downward position, the same to be considered as off position.

Note: Sometimes, It will be in the middle position, that time MCB cannot be ON even if we push it upward. It means that the MCB is in trip condition. To reset the same, we need to again pull it in a downward direction.

It is a coil used to trip the circuit breaker under short circuit and instantaneous fault condition. It is connected in series with the input line.

The inner part of the coil consists of a tripping rod, plunger, and a return spring. A bimetallic strip is nothing but a small connecting metal that is associated with the tripping mechanism. It is a combination of steel and copper or steel and brass. Mostly steel is used since the resistivity of the steel is high. The output of the coil is connected in series with the bimetallic strip.

The bimetallic arrangement is used to trip the circuit under an overload condition. It works based on “the physical state of the metal changes when the temperature of increase”.

Note: under trip condition, the bimetallic strip will be in high temperature, since you should allow some time to reduce the temperature. During that time, It will not get reset.

Arc chute or arc extinguisher is a bunch of steel plates with zinc-coated material arranged as shown in the figure. The main purpose of the arc chute is, quenching the arc which developed inside of the MCB while breaking the circuit.

Learn More:   How To Make A Electrical Starter and Power Circuit

It increases the life span of the circuit breaker.

An electrolytic copper or steel screw allows us to connect the MCB to the power source. Mostly the bottom and top side screw indicate the output and input terminal.

Sometimes I have seen, few manufactures do not use a screw. Instead, they use the lock mechanism to hold the terminal. I mean push to lock and unlock.

What type have you seen before? Leave a comment…

It is used to connect the moving element to the standstill element.

The DIN rail connection is used to mount an MCB in a rack. It would be the backside of the MCB and it is a standard size, irrespective of its size or poles or tripping or manufacture.

All the operations are performed inside of the encloser and which is riveted to get better mechanical strength. The encloser is made up of high insulated fiberglass. Since they offer excellent heat resistance up to 500deg.

Under overload condition which means the current flows through the MCB is higher than the rated current. Now I²*R loss is generated in the bimetallic strip and simultaneously heat will be produced. The bimetallic strip starts bending. Due to this, the tripping mechanism will be operated. Refer to the below mentioned… 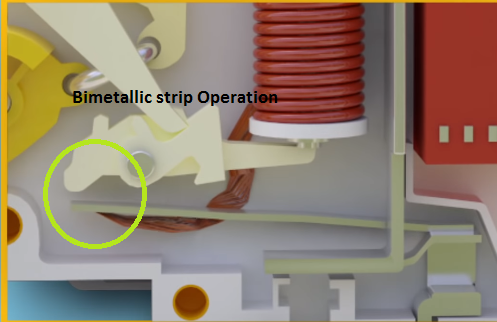 Under the short circuit conditions, the high current flows through the solenoid coil which creates a strong magnetic field. Due to this, the plunger inside of the tripping mechanism will be getting attracted. The plunger pushes the tripping rod. The tripping rod trips the circuit breaker without time delay.

Also, overload notation is indicated in the curved shape and short circuit notation will be indicated at a square shape..refer to the picture.. As we discussed earlier, MCB operates under two fault conditions such as overload and short circuit. For better understanding let us take an example of the single-pole 20 Amps Anchor to make MCB.

C20 maximum allowable current: 20 Amps. Your MCB can withstand up to 20A, beyond that level, our MCB will consider as overload or over current.

10000 Maximum short circuit current capacity: Your MCB short circuit withstand is range 10kA. Beyond that limit, MCB will not be in the original state which may damage physically.

3 indicates the energy level of the mcb: The MCB can be used up to 5.5 KW of Power.

In our case, if the input current through the MCB is reached more than 20 A means, the bimetallic arrangement trips the MCB. It is called an overload trip.

The overload trip will not trip the circuit instantly. It takes some time to reach the tripping stage. The tripping time will be 5 to 10 secs.

At the same time if the current flow through the MCB is more than the 4 to 10 times of its full load current means the solenoid coil trips the circuit. The short circuit does not take much time to operate. Tripping time will be 20ms.

They are classified into five major types according to their instantaneous tripping characteristics. Look at their operating curves..

I have worked in the industry for over 10 years, let see the few questions.

How to Select MCB?

My suggestion is to go for a cheaper one that is L&T.

At the same time, you should see the available protection refer to the picture the MCB is having both short circuit and overload protection.

But some manufacturers do not include both the future.

How to rest the MCB:

Under the trip conditions, It will be in mid-portion state. Just Pull it in downward for reset and push in upward turn on.

If it trips in short circuit condition, you can reset it immediately, but if it is tripped in overload means, it takes max 30 sec to reset.

Go for Type B which gives better performance for households such as lights, water heater, DVD player, Geiser.

Learn More:   Why Capacitor and Inductor are used in Filtering Circuit

Type K can be used for inductive loads such as motor, air conditioners, water pumps etc.

What are the steps to avoid the failure of MCB?

How to Select MCB for Industrial Use as per Installation:

Video Explanation of MCB in English:

What is Harmonics, Creation, Elimination in Power system