What is Fault in the Electrical power system:

In an electric power system, a fault or fault current is nothing but any abnormal electric current flow in the circuit.

Fault in electrical is nothing but a flow of un-planned current in the circuit. It occurs due to various technical and environmental conditions.

The current is associated with the fault is called fault current. During the fault, the current will be maximum typically 4 to 10 times the full load capacity of the equipment.

For example, during short circuit normal current bypasses the load.

In three-phase systems, a fault may involve Ground faults (L-G, L-L-G, L-L-L-G) or Short Circuit Faults. In a “ground fault” or “earth fault”, current flows into the earth.

The prospective short-circuit current of a predictable fault can be calculated for most situations.

In power systems, protective devices can detect fault conditions using instrument transformer such as a voltage transformer/current transformer and operate circuit breakers and other devices to limit the loss of service due to a failure. 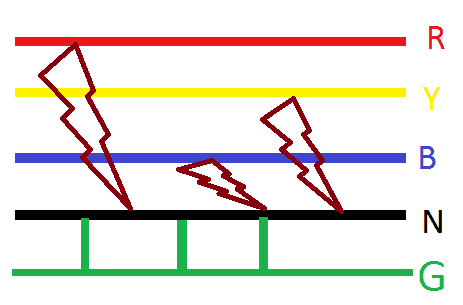 In a polyphase system, a fault may affect all phases equally which is a “symmetrical fault”. If only some phases are affected, the resulting “asymmetrical fault” becomes more complicated to analyses.

The analysis of these types of faults is often simplified by using methods such as symmetrical components.

The design of systems to detect and interrupt power system faults is the main objective of power system protection.

Faults may occur in the three-phase or single-phase power system due to a number of reasons like natural disturbances (lightning, high-speed winds, earthquakes), equipment insulation failure, falling off a tree, bird shorting, Line Overloads, etc.

Transient fault: The fault occurs in a Very Short time or an insulation fault which only temporarily affects a device’s dielectric properties which are restored after a short time.

Persistent fault: Fault in the Under Ground cable

Bolted Fault: One extreme is where the fault has zero impedance, giving the maximum prospective short-circuit current.

Ground fault & earth fault: A ground fault and earth fault is any failure that allows the unintended connection of power circuit conductors with the earth.

Realistic faults:
Realistically, the resistance in a fault can be from close to zero to fairly high relative to the load resistance. A large amount of power may be consumed in the fault, compared with the zero-impedance case where the power is zero.

Also, arcs are highly non-linear, so a simple resistance is not a good model. All possible cases need to be considered for good analysis.

Arching Fault occurs due to the high system voltage, Such an arc can have a relatively high impedance (compared to the normal operating levels of the system) and can be difficult to detect by simple overcurrent protection.

During open circuit fault, the current flow through the line is zero, and the voltage across the circuit will be high (at the rated voltage). Due to this unbalance current flow occurs in the circuit. In the three-phase line, if an open-circuit fault occurs in one phase means, the remaining two phases take the load current of the failures phase.

Therefore 50% of the extra current flows in the remaining two phases. It causes equipment failure.

In motors, a motor protection circuit breaker is used to protect them against the open circuit faults.

It occurs due to environmental conditions such as a fallen tree on the overhead cable, conductor meltdown, un-uniform circuit breaker closing, etc.

You should know that the current is always preferring to flow less resistance path.

When the line touches with another line means, the voltage between these two lines becomes zero, hence the current will become very high. Short circuit faults are very dangerous to the electrical equipment since they dames easily.

Short circuit faults are classified into two categories such as

Symmetrical fault involves all the three phases, and these phases carry the identical fault current which makes the system balance.

It also called a balanced fault since the current flow through the circuit will be the same. The fault acts like a star connected load.

The symmetrical fault can be rectified by the distance relays. The relay measures the impedance of the circuit on the zone basis. During the fault, the current will be maximum and the voltage will start dropping to the maximum to zero.

The impedance can be calculated from ohms’ law. If the impedance reaches a preset value, the relay trips the circuit.

Learn More:   How to Choose Right Starter For Motor?