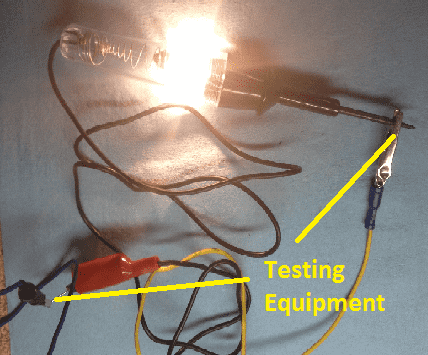 In case Megger, they are having ability to generate up to 7kV across the output terminal, since they are used to trace the faults on electrical circuits such as motors, transformers, cables etc.

Series test lamps ensure the problem on the electrical equipment, If an equipment fails on series test lamp method, the equipment never going to be charged. That will be considered as a faulty item.

All three equipments are working under the principle of short circuit and open circuit concept:

Here, Multi meter just injects 5 volts DC to the output circuits, and receive some few micro ampere currents for the normal circuit under fault condition the Multimeters receives high amount of current typically few milli amps. Due to this variation in the current, the multi meter starts reading the resistance across the terminal.

Megger applies 700V to 5kV DC (Depending on the rating). Megger measure the Insulation resistance of the device.

Series test lamps are nothing but a 230 volts’ incandescent bulb (the bulb specification is depending on the application) is generally connected in series with the phase, load and neutral as shown in the figure. Under Normal condition, the test lamp does not get power from the source, but Whenever a fault in the load, the test lamp starts glowing. For better understanding please refer, the diagram. Observe the red color circuit, the terminals are having contact between phase and ground. During the normal condition the insulation resistance will be high, since the lamp does not glow, but during fault condition the lights starts glowing due to the current flows through the fault mouth.

Note: While using Those testing devices, the equipment (testing to be done) should be isolated from the input power supply.

The minimum value that will be obtain from the individual equipment to ensure the equipment faulty.

Source of the multimeter, Megger and series test lamp:

Less in multi meter and Megger and series test lamp are having High Accuracy.

Multimeter does not require but series test lamp and Megger produces high voltage, touching those terminal in with empty hand, cause electrical shock.

Learn More:   Why Stones are used in Transformer Yard & Switchyard?