RCCB is used to protect the electrical circuit from earth fault. Formally It is called as ELCB (Earth leakage Circuit Breaker). Sometimes it is also called as RCD (Residual current Device). In this article, we are going to study about RCCB definition, working principle, test operation, rating of RCCB, Types of RCCB, Connection, Advantages and Disadvantage.

ELCB is nothing but an earth leakage circuit breaker. RCCB is an updated version of ELCB. The current operated elcb device if called as rccb. 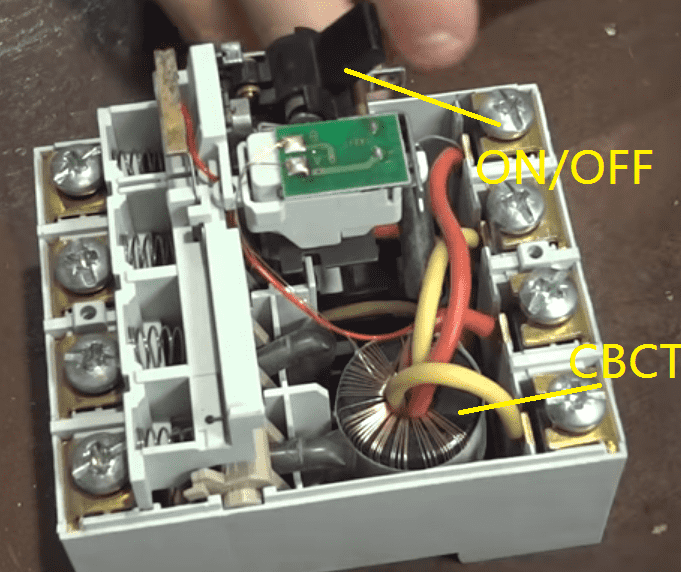 ON/OFF switch: The handle is used to switching on/off the rccb.

Test Circuit:  A Test switch is used to check the working condition of rccb. See circuit diagram of test Circuit. In that, a switch is connected between line to earth (in series with a resistor). When you press a switch the current starts flow from line to earth. Then RCCB trip the circuit.

Under Normal condition, the Total current flows in the phase wire is equal to neutral wire. i.e consider now you have 10Amps is phase side means the same current 10 Amps flow in the neutral side also. Since the CBCT (core balance current transformer) do not sense any current when the current flow in the phase wire (IL) is equal to neutral wire (IN). During earth fault condition, the fault current or leakage current (IE) starts flow from the phase wire (red) to earth wire (green) i.e consider leakage current is 300mA. Since CBCT reads the unbalance current of 300mA, the same current will be sent to the relay operating coil. if the leakage current exceeds the rated tripping level IΔn, then the RCCB trip the electric circuit.

Learn More:   What is Distribution factor?

RCCB has an ability to protect human from electrical shock, such protection needs very low rated rccb which means human can stand upto 20mA of electric current, Since RCCB needs to be selected just near about 20mA. For shock protection rccbs are coming with the rating of 30mA. Generally, RCCBs are having rated between 30mA to 300mA (0.03A to 0.3A). So the best choice, for electrical shock protection is 30mA RCCB.

Three different type RCCBs are classified according to types of source used.

Type AC: Only AC source can be used

Type A: AC source + Pulsating DC source can be used

Type B : AC as well as DC can be used

RCCB are generally used with the combination of MCB, but you should connect the MCB before RCCB. Because..

Case 1: MCB is connected before RCCB:

Case 2: MCB is connected after RCCB:

Fault on the house load side, MCB detects the fault and trips the circuit. At the same time, if the fault occurred in between RCCB and MCB means the MCB cannot protect the circuit against short circuit and RCCB does not deduct the fault. The fault will be remaining in the line. That’s why MCB should be connected before the RCCB.

It is now possible to get an MCB and RCCB in a single unit, called an RCBO. Replacing an MCB with an RCBO of the same rating is generally safe.