Reactive power is an imaginary power which is delivered by capacitors and alternators. Consider the case in which the load is a pure capacitance for which Z =(1/ωC) ∠−90◦ . Then, θ= −90◦, and we have 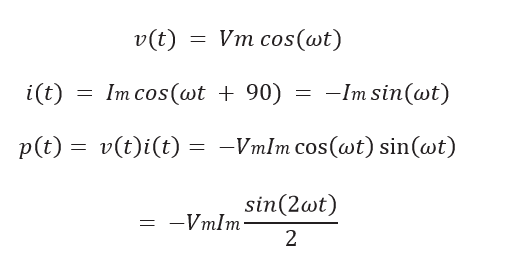 The power flow back and forth to inductances and capacitances is called reactive power. Reactive power flow is important because it causes power dissipation in the lines (power loss) and transformers of a power distribution system.

Even though no average power is consumed by a pure energy-storage element (inductance or capacitance), reactive power is still of concern to power-system engineers because transmission lines, transformers, fuses, and other elements must be capable of withstanding the current associated with reactive power. It is possible to have loads composed of energy-storage elements that draw large currents requiring heavy-duty wiring, even though little average power is consumed. Therefore, electric-power companies charge their industrial customers for reactive power (but at a lower rate) as well as for total energy delivered.