This power factor calculator is handy for analyzing alternating current (AC) flowing in circuits. You probably already know that you can model direct current (DC) with the help of Ohm’s law. For AC, this task is not so simple because such circuits have both real and reactive power.

This calculator helps you find the values ​​of different types of power in a circuit and gives you a power factor formula that expresses the relationship between real and apparent power.

Go through these guiding principles and rules to find the result in seconds.

Before learning about power factor, you should get an idea about terms like real power, reactive power, apparent power and power triangle.

Since the apparent power can be found by the vector addition of real and reactive power, we can use a graphical method called the power triangle to represent these three values ​​in triangular form. 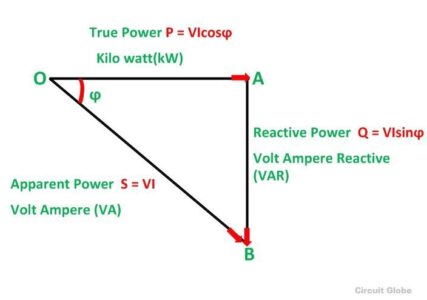 One of the consequences of using the power triangle is that we can easily establish a mathematical relationship between the three values ​​using the Pythagorean Theorem:

Power factor is P(w) in watts and divided by the apparent power s(VA)  in Volts per Ampere is equal to the cos  φ.Hence the power factor formula can be written as

It is the ratio of real power and apparent power.If  there is no reactive power in the circuit m then the power factor is 1.

The formulas to compute the resistance, reactance and impedance are along the lines

P=is the real power in watts

Q=is the reactive power in watts

S=is the apparent power in VA

φ = is the phase angle

R=is the resistance in ohm

X = is reactance in ohm

I= is current in Ampere

If 20 A of electric current is flowing through the circuit and its real power is 150W, and reactive power is  54 VAR, Find its power factor, resistance, impedance?